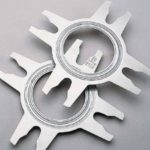 We offer you a leakfree system, not just a gasket. Our Selco Seal® design is modern and superior to all other forms of sealing. Our seal is as good as a weld. Metal to metal seal, no over stressing of bolts and high unit load on sealing material. Our standard sealing element, flexible graphite, is a true high temperature non-asbestos replacement. Once you install it, you can forget about it. Our design eliminates cold flow of TFE and fugitive emissions. No re-torqueing, one less problem for maintenance. (self-locating)

Flange bolts are torqued to stretch them and place load on the gasket face.

The conventional gasket on the left has a large contact area and often requires greater than 10,000 psi seating stress to compress

This means the flange bolts, which have much less area than the gasket face they squeeze, are often torqued to near their yield strength.

If the flange expands due to process cycles, the bolts will often exceed their elastic limit (like overstretching a spring), the gasket becomes a leaker, and a retorque of the bolts must be done.

This gives 40% compression of the sealing element and a 20% margin for recovery, at a bolt torque equaling <50% of yield, plenty of margin for process cycling without retorquing.

For the most demanding of applications, the flange can be Live Loaded along with the Selco Seal gasket to give the ultimate in spring capacity.